The Midnight Madness Virgin Kit (or "prop kit", "throw bag", "shit to throw", etc.) contains a large portion of the things you need to use and throw at a Rocky Horror showing. This page goes into detail about what's included in the kit and what restrictions we have on what you can use.

The kits are 3 dollars each. We really don’t care who told you the price was anything different.

We usually do not get paid for performing, and 100% of the proceeds from kit sales go back to cast costumes, props, promotions, and kit supplies. Other than straight up donations this is how Midnight Madness gets its money to look cheap.

Your first "Don't Look Like A Virgin" Pro-Tip: DO NOT throw shit at the screen - that's just way NOT cool. This is the holiest of holy rules and the one that will get you ejected from the theater if you want to test it. We take our relationship with our partner theaters seriously, and will not tolerate any behavior that could damage their property.

Our Audience is welcome to build their own kits and bring them in, but bear in mind we'll poke through your bag and anything that we don't let in your theater will be given to hungry college students on cast. We don't care how traditional you think it is to throw a hotdog in a movie theater, take your pocket dog somewhere else. A Card Explaining All This Shit
We don’t expect you to remember all this or have the foresight to print this page, so we made these handy cards that come with the kits that explain everything!

Balloon
When to use: During the song Science Fiction Double Feature, then immediately after “When Worlds Collide” is mentioned - pop the balloon.

Glow Stick
(No lighters, matches, or flammables)
When to use: During the song “There's a Light (Over at the Frankenstein Place)”, while the ‘There's a Light’ chorus is playing. (Transylvania may not have a fire code, but Chicago does).
Don't Look Like A Virgin Pro-Tip: Only hold up and wave the light stick during the actual chorus, when they say "in the darkness", lower/conceal it. You may also use flashlights or your cell phone.

How to Time Warp Flier
When to use: During Time Warp!

Rubber Glove
When to use: During Frank's speech at the tank when he puts on the gloves, stretch and snaps yours.

Noisemaker
When to use: During the "Lab" scene, when the Transylvanian Guests use their noisemakers.

Confetti
(2 confetti streamer poppers are included with the kit)
When to use: One during the wedding in lieu of rice, one at the end of the "Lab" scene when the wedding march is being played and guests are throwing confetti.

Toilet Paper
When to use: When Dr. Scott makes his entrance and Brad exclaims "Great Scott!". Remember: if you're in the front you throw back. If you're in the back you throw up. Do not throw shit at the screen.

Party Hat
When to use: During dinner, Frank will put on his party hat, and you should too - it's a PARTY now!

Paper Plates
When to use: When Frank pulls the table cloth off the dinner table.

Sponge
When to use: When Columbia is doing her "bitch out" speech and says to Frank, "you're like a sponge!"

Cards
When to use: After floor show, when Frank is doing his solo number and sits down and sings the line "cards for sorrow, cards for pain".

Items that you may remember from that time you went to Rocky Horror in 1982, but we DO NOT have in our kits and DO NOT ALLOW at our shows:

Rice
We include an extra confetti popper to use instead.
Used at the beginning of the film when the wedding guests exit the church. Kit buyers can use one of the confetti poppers included in the kit at this time. Rice is very difficult to clean up and makes the floor extremely slippery for the performers, and can attract rodents and such if not completely cleaned up. Don't use this at Midnight Madness shows.

Water Guns
We’ll tell you when we’re wet, we don’t need your help.
Usually used during the song "There's a Light (Over at the Frankenstein Place)", while they are walking through the rain, you spray your watergun at everyone next to you and make some new enemies.

Hot Dog and Prunes
No, NO, NO!
It has happened, on occasion, where people use these items during their mention at the times in the film - we do not allow these, or anything else that spoils, in the theater and they will be confiscated during door search. Seriously though... who comes up with this shit?

Toast
Again, small pieces of food are hard to clean and attract rodents.Usually used during after Frank is done carving, he will lift his class and proclaim "a toast." Fun Props to Bring From Home Not Included In Our Kits, But Used But Seen At Midnight Screenings

Rope
When to use: When the rope falls from the rigging after Riff finishes shooting.

Bell
When to use: When Frank is chasing Janet after dinner and asks the musical question "did you hear a bell ring?" during the song "Planet Schmanet"
Don't Look Like A Virgin Pro-Tip: A bell is preferred, but your keys work too!

Large "J"-"A"-"N"-"E"-"T" cards
When to use: During Dammit Janet when Brad says Janet's name, and when spells out Janet's name, each card is held up as he spells it. Some people also write "Oh" "B"-"R"-"A"-"D" on the back of them and use them then. (This is usually kind of hard to pull off and look good, and you need several people to do it, so it's not done very often by audience members. If you manage to pull this off with from friends, as for a cast exec to see if you can't do this somewhere in the front. We want you to participate!) 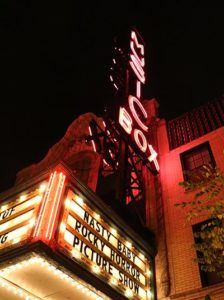